CPU caches are very fast and small memories. They are part of the CPU and store a subset of the data present in main memory (RAM) that is expected to be used again soon. Their purpose is to reduce the frequency of main memory accesses.1

Why can’t we just have one uniform type of memory that’s both big and fast? Cost is one reason, but more fundamentally, since no signal can propagate faster than the speed of light, every possible storage technology can only reach a finite amount of data within a desired access latency.

Whenever a program requests a memory address the CPU will check its caches. If the location is present, a cache hit occurs. Otherwise, the result is a cache miss and the next level of the memory hierarchy, which could be another CPU cache, is tried.

CPU caches are managed by the CPU directly. They are generally opaque to the operating system and other software. That is, programmers have no direct control over the contents of CPU caches. Unless explicitly prevented, the CPU brings all accessed data into cache. This happens in response to cache misses and will, much more often than not, cause another cache entry to be evicted and replaced.

Current x86 CPUs generally have three main types of caches: data caches, instruction caches, and translation lookaside buffers (TLBs). Some caches are used for data as well as instructions and are called unified. A processor may have multiple caches of each type, which are organized into numerical levels starting at 1, the smallest and fastest level, based on their size and speed.

In practice, a currently representative x86 cache hierarchy consists of:

Let’s verify those sizes and measure the access latencies. The following C program repeatedly reads elements from an array in random order.3 To minimize the overhead of picking a random index, the array is first set up as a circular, singly linked list where every element except the last points to a random successor. When compiled with -DBASELINE, only this initialization is done.

Here are my results for different array sizes (set at compile time with the SIZE macro): 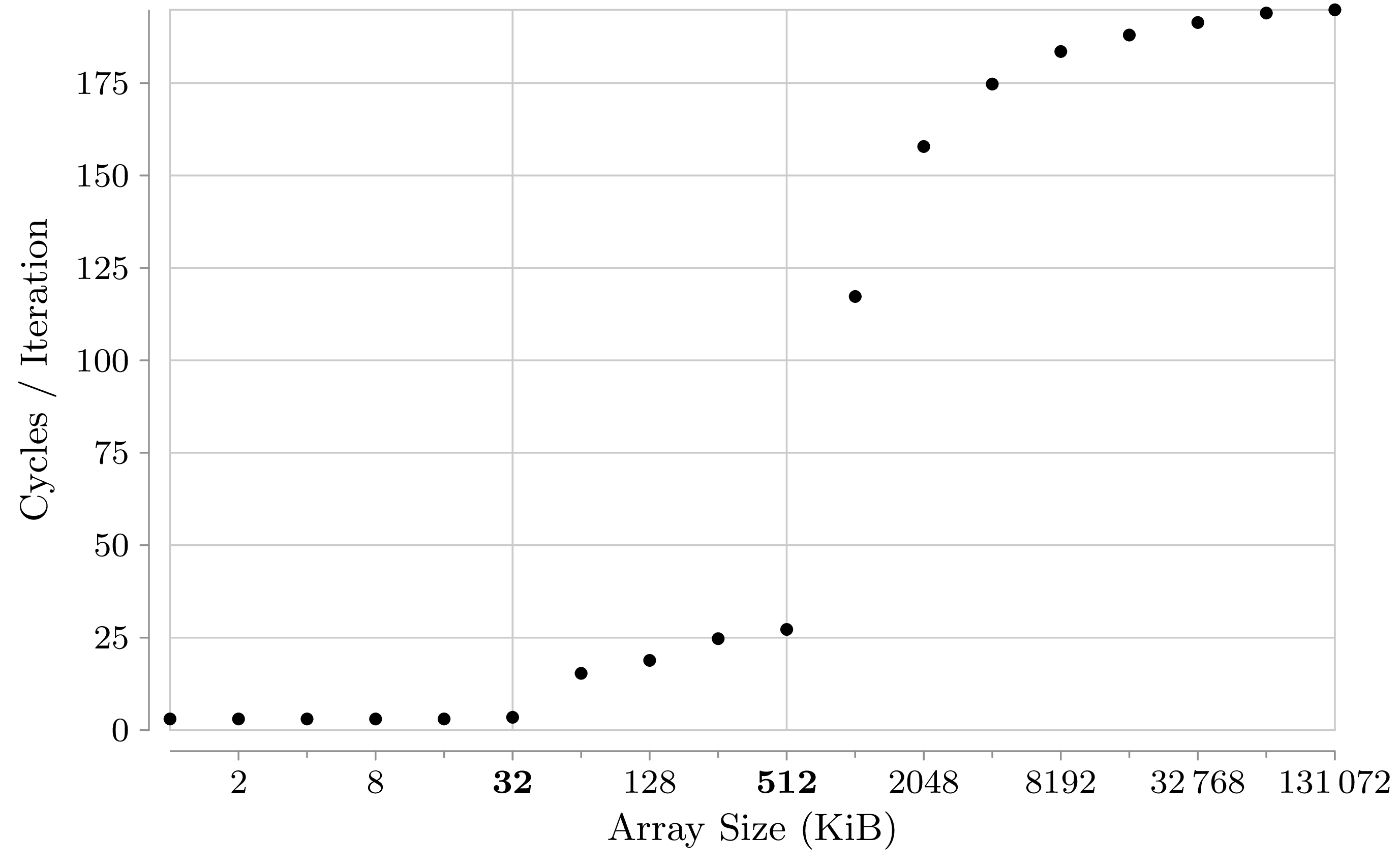 Up to 32 KiB, each access takes almost exactly 3 cycles. This is the L1d access time. At 32 KiB (the size of the L1d) the time increases to about 3.5 cycles. This is not surprising since the cache is shared with other processes and the operating system, so some of our data gets evicted. The first dramatic increase happens at 64 KiB followed by smaller increases at 128 and 256 KiB. I suspect we are seeing a mixture of L2 and L1d accesses, with less and less L1d hits and an L2 access time of around 25 cycles.

The values from 512 KiB (the size of the L2) to 128 MiB exhibit a similar pattern. As more and more accesses go to main memory, the average delay for one access approaches 200 cycles.

Cache lines or cache blocks are the unit of data transfer between main memory and cache. They have a fixed size which is typically 64 bytes on x86/x64 CPUs—this means accessing a single, uncached 32-bit integer entails loading another 60 adjacent bytes.

My E-450 CPU is no exception and both of its data caches have 64-byte cache lines:

We can verify this quite easily. The following program loops over an array with an increment given at compile time as STEP and measures the processor time.

These are my results for different values of STEP:

As expected, the time roughly halves whenever the step size is doubled—but only from a step size of 16. For the first 4 step sizes, it is almost constant.

This is because the run times are primarily due to memory accesses. Up to a step size of 8, every 64-byte line has to be loaded. At 16, the values we modify are 128 bytes apart,4 so every other cache line is skipped. At 32, three out of four cache lines are skipped, and so on.

Both cache and main memory can be thought of as being partitioned (in the set-theoretic sense) into cache lines. Data is not read or written starting from arbitrary main memory addresses, but only from addresses that are multiples of the cache line size.

Consider a simplified version of the C program accessing elements of an array at random that just walks over the array sequentially. It still follows the pointers to do this, but the array is no longer shuffled. These are my results of profiling this new program as before:

Until the working set size matches that of the L1d, the access times are virtually unchanged at 3 cycles, but exceeding the L1d and hitting the L2 increases this by no more than a single cycle. More strikingly, exceeding the L2 has similarly limited effect: the access time plateaus not much above 6 cycles—about 3% of the maximum we saw for random reads.

Much of the improved performance can be explained by the more optimal use of cache lines: the penalty of loading a cache line is distributed among 8 accesses now. This could at best get us down to 12.5%. The missing improvements are due to prefetching.

Prefetching is a technique by which CPUs predict access patterns and preemptively push cache lines up the memory hierarchy before the program needs them. This can not work unless cache line access is predictable, though, which basically means linear.5

Prefetching happens asynchronously to normal program execution and can therefore almost completely hide the main memory latency. This is not quite what we observed because the CPU performs little enough work for memory bandwidth to become the bottleneck. Adding some expensive operations like integer divisions every loop iteration changes that and effectively levels the cycles spent per iteration across all working set sizes:

What I described in this section is hardware prefetching. It uses dedicated silicon to automatically detect access patterns. There is also software prefetching, which is triggered by special machine instructions that may be inserted by the compiler or manually by the programmer.6

Two properties exhibited by computer code to varying degrees distinctly impact cache effectiveness. One is temporal locality. The other is spatial locality. Both are measures of how well the code’s memory access pattern matches certain principles.

One access suggests another. That is, once referenced memory locations tend to be used again within a short time frame. This is really the intrinsic motivation for having a memory hierarchy in the first place. When a cache line is loaded but not accessed again before being evicted, the cache provided no benefit.

1. For each accessed memory location, nearby locations are used as well within a short time frame. 2. Memory is accessed sequentially.

We have already seen that caches take advantage of both these principles by design:

Access to instructions inherently has good spatial locality since they are executed sequentially outside of jumps, and good temporal locality because of loops and function calls. Programs with good locality are said to be cache-friendly.

The following C++ program (adapted from this article by Sergey Ignatchenko) initializes a number of STL containers with random numbers and measures the processor time needed to sum all of them. I first ran it with Container being a type alias for std::list, then for std::vector. Either way, the asymptotic complexity is Θ(N).

My result is that computing the sum completes 158 times faster when using std::vector.7 Some of this difference can be attributed to space overhead of the linked list and the added indirection, but the more cache-friendly memory access pattern of std::vector is decisive: using std::list as in this example means random memory access.

In OOP, variables are typically referred to by pointers to a common base class. A polymorphic container of such pointers allows for dynamic dispatch of virtual functions. However, this carries the risk of degrading the performance of a sequential data structure to that of a list.

The hidden constant separating the time complexities of two reasonable algorithms under asymptotic analysis can get quite big because of cache effects. Understanding how CPU caches work helps make good choices for writing fast programs and I hope this article provided some insight. For a more in-depth discussion, you can read Ulrich Drepper’s paper “What Every Programmer Should Know About Memory”, which also covers virtual memory, cache associativity, write policies, replacement policies, cache coherence, software prefetching, instruction caches, TLBs, etc.

You can find discussions of this article on Hacker News and Reddit.